Get four new model kits delivered to your door approximately every month for only $12.90 + $2.45 shipping per kit.

When you subscribe you will receive exclusive free gifts valued at over $100.

Build, enjoy, and relax. Your subscription is risk-free and there is no minimum number of model kits to purchase. Cancel any time. No questions asked.

Store all your collector’s guides together in this specially designed binder.

FREE WITH YOUR 2ND DELIVERY

Receive a free screw box, Ideal for organizing and storing your spare screws.

FREE WITH YOUR 3RD DELIVERY

Get this specially commissioned t-shirt featuring the logo of the Galaxy-class development project at Utopia Planitia Shipyards where the Enterprise-D was built.

FREE WITH YOUR 5TH DELIVERY

Show your model off with this specially designed stand, complete with the Starfleet logo.

FREE WITH YOUR 14TH DELIVERY

As a subscriber, you get the exclusive opportunity to upgrade your subscription for only $1 extra per model kit and receive this DELUXE DISPLAY BASE!

Our model pulls elements from all three of the models and is designed to look as much like the onscreen version as possible.

A CLOSER LOOK AT YOUR MODEL

The model is a 27.5-inch die-cast replica of the Galaxy-class U.S.S. Enterprise NCC-1701-D. It is based on careful study of the different studio models that were used in filming, it is designed so the saucer and the stardrive section can separate, and it is packed with working lights. The exterior has all the details you’d expect, including phaser strips, transporter emitters, antimatter loading hatches, and the Captain’s yacht.

YOUR MODEL COMES WITH WORKING LIGHTS

The model is packed with working lights; the windows throughout the ship are illuminated, the navigation lights, main deflector, and the impulse and warp engines all light up. The saucer and stardrive sections have separate power sources and controls so they can be operated independently.

Play the videos below to get a close-up look at your model and to find out more about it.

The interior is packed with working lights, that bring everything to life, with separate power supplies for the saucer, stardrive section, and each nacelle. The exterior of the model is packed with details including phaser strips, transporter emitters, sensor arrays, anti-matter loading hatches, and the Captain’s Yacht. 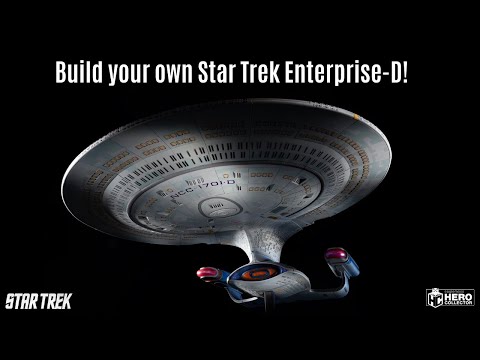 Your collector’s guide is packed with inside information and unique insights from the people who made STAR TREK: THE NEXT GENERATION.

Your magazine starts off by looking at how Andy Probert designed the Enterprise-D and features an in-depth interview and his original production artwork.

Later magazines will examine the different filming models in-depth, the design of the Enterprise’s interiors, and the secrets behind the visual effects.

Every kit comes with simple instructions that show you exactly how to put the pieces of your model together. The instructions couldn’t be easier to follow, every part is labeled and color-coded.

The building process is incredibly straightforward. All the pieces are pre-painted, with all the decals in place. You simply clip or screw them together. There’s no need for any glue and you won’t need any tools that are more complicated than a screwdriver.

A long-time fan of the original STAR TREK, Andrew Probert was able to realize his ambition of designing a brand new version of the U.S.S. Enterprise when he was invited to join the staff of STAR TREK: THE NEXT GENERATION.

Learn how Andrew Probert's designs for the new U.S.S. Enterprise was turned into three different sized studio models. Your own model of the Enterprise is a detailed and accurate replica of these original visual effects models which appeared on screen in STAR TREK: THE NEXT GENERATION.

Discover how STAR TREK: THE NEXT GENERATION's senior illustrator, Andrew Probert, set about designing the bridge for the new U.S.S. Enterprise. 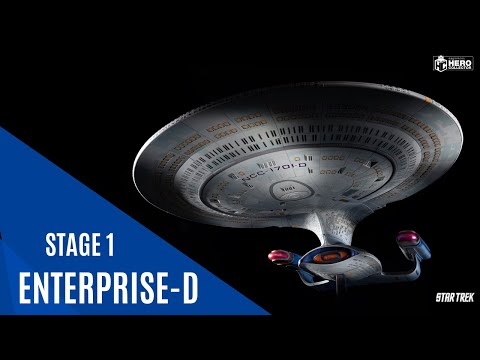 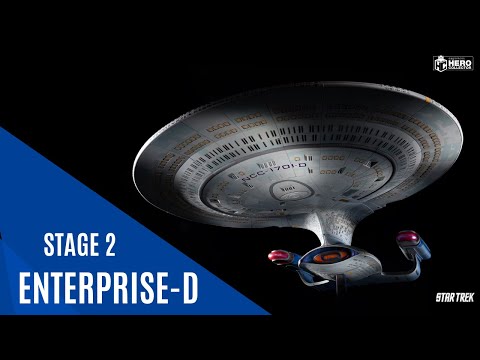 What will I receive each month?

After you receive your introductory package, you will receive 4 new model kits and magazines approximately every month to continue building your Star Trek Enterprise Build-up. You will automatically be charged only $12.90 per kit. Shipping is just $2.45 per kit. You will also receive 4 fantastic free gifts during your subscription.

View All
How many model kits are planned for the whole collection?

Your collection is complete in 120 model kits.

What are free gifts?

Free gifts are special items that you receive for free as a "thank you" for continuing your subscription program. As long as you are an active subscriber you will be eligible to receive free gifts during the course of your subscription.

You may also receive special subscriber-only offers and shipments of selected items to compliment your collection. You’ll receive details and pricing in advance so you can tell us if you don’t wish to receive these.

Can I get the free gifts without subscribing?

These gifts are exclusive to subscribers so no you cannot purchase them without subscribing. If you would like to subscribe you can do so via our subscription page.

I have not received all my model kits, can you help?

Our Customer Services Team can sort this out for you. If you email the team, on [email protected] please include your name and subscription reference in the subject line.

I have received the wrong model kit/s.

We will replace all your model kits with the correct copies. Contact our Customer Services Team at 1-800-261-6898 or email [email protected] Please include your name and subscription reference in the subject line.

How will the payments appear on my bank statements?

Payments will be processed by Eaglemoss, Inc.

You can contact our customer service team at [email protected] or call 1-800-261-6898 (Monday to Sunday, 8 am - 10 pm EST). If you email the team, please include your name and subscription reference in the subject line.

How can I pause my subscription?

If I want to cancel my subscription am, I entitled to a refund for my premium payments?

No, you will not be refunded.

If I cancel my subscription am I able to pay the remaining premium payments to receive the additional items?

No, premium items are only available if your subscription is still running.

How can I get copies if I live outside the US?

This collection is also available in the UK and selected EU countries.

Please note, this collection is currently available in the English language only.