Build the Back to the Future DeLorean - Editorial A

WHAT BACK TO THE FUTURE GOT RIGHT!

Remember when you came home from work in your flying automobile, tripped over your kids' hoverboards, loosened your double-tie, rehydrated a pizza, read the latest messages on your family's multiple fax machines, and scheduled a spleen replacement at your local rejuvenation clinic, then took your family to see Jaws 19? No?

Well, had the creators of the Back to the Future trilogy had their way, the above might very well have described your average Saturday. When Emmett Brown brought Marty McFly and Jennifer Parker to save their future children in the concluding scene of 1985's Back to the Future, moviegoers were left wondering what would happen next. Four years later, they found out—and, astounding though it may be, the far-off future to which the characters traveled in Back to the Future Part II is now our past.

In creating the fictional future society of 2015, writer-director Robert Zemeckis and co-writer Bob Gale extrapolated what that world would be like, based on then-present-day styles and innovations. Some depictions were amusingly off the mark (flying cars topping the list), while others were impressively spot-on. Let's examine some of the things Gale and Zemeckis got right—then, in part two, we'll look at what didn't quite pan out as predicted.

So What Did They Get Right?

Perhaps the film's greatest success in predicting the future involved the vidphone hanging in the McFly family's living room—the large television screen on which Marty Jr. watched six channels simultaneously, and on which Marty Sr. conversed with Douglas Needles and Mr. Fujitsu. In essence, Zemeckis and Gale accurately predicted not only wall-mounted, flat-screen TVs with picture-in-picture capability, but also voice-over-IP services and instant-messaging clients, as well as the integration of television with computers and phone service. Remarkable!

Marty views an outdoor screen celebrating the Chicago Cubs' recent World Series win against a team based in Miami. When the film came out in 1989, this provided a double-joke, as the Cubs had not won a World Series at that point since 1908, and no Major League team yet played in Miami, or anywhere else in Florida, for that matter. In 1993, however, the Florida Marlins were formed, and the team was later renamed the Miami Marlins. The Cubs did not make it into the World Series in 2015, but only one year later, they faced off against the Cleveland Indians at the 2016 World Series, ending the Cubs' 108-year championship drought—and they did, indeed, win. It may have been a year off of Back to the Future's prediction, and they may not have played against Miami, but it was pretty damn close. 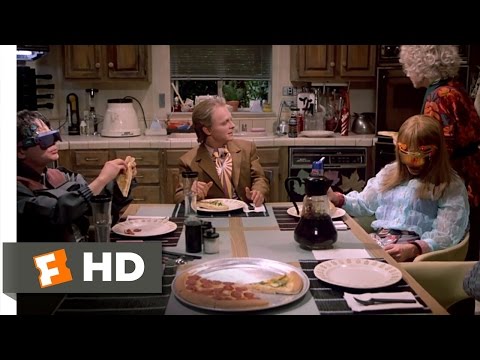 The McFlys' 2015 home is a fascinating lesson in future predictions. Smart-home technology—the automation and control of heating, air conditioning, ventilation, lighting, and appliances—is a market predicted to reach US$10 billion by 2020, thanks to the advent of RFID, the Internet of Things, ZigBee, and other technologies. What's more, the use of biometrics has helped to greatly improve security and access control. In Back to the Future II, Marty's "future" home features voice-activation for atmospheric settings (including, amusingly, "lithium") and TV control; a thumbprint-based identi-pad to restrict admittance; and a kitchen appliance called the Garden Center, which automatically descends from the ceiling to provide fruit when summoned by voice to do so. The McFlys' smart home is so on the mark that it no longer seems futuristic—for the most part, it already exists.

During a dinner scene, both of Marty's children sport electronic eyewear that displays information while allowing them to view what is in front of them. When the movie came out, this seemed like science fiction, but these days, smart glasses—made by Google, Microsoft and Vuzix, for instance—are commonplace, utilizing an optical head-mounted display, a transparent heads-up display, or an augmented-reality overlay to project images and data. Marty's daughter Marlene answers a phone call using her glasses, and both she and Marty Jr. are more interested in what their screens are showing than in what is going on around them. This foreshadows the tendency today of many people, particularly teenagers, to constantly access their smartphones, tablets, and other devices, ignoring their surroundings, even when others are talking.

Three-dimensional stereoscopic films have existed since 1915, but following their prominence in movie theaters during the 1950s, they became largely relegated to niche entertainment. In the 1980s, the fad briefly resurged with a few new 3D movies (such as Jaws 3-D, Amityville 3-D, Friday the 13th Part III and Captain EO) and a line of 3D comics from Blackthorne Publishing, then quickly faded back into obscurity, once again viewed as a gimmick. Back to the Future II posited another resurgence with director Max Spielberg's holographic movie Jaws 19. Although Steven Spielberg's son, now an adult, did not become a director in real life, and no Jaws films (thankfully) have been made since 1987's abysmal Jaws: The Revenge, 3D is all the rage again, thanks to IMAX and high-definition film and TV technologies. 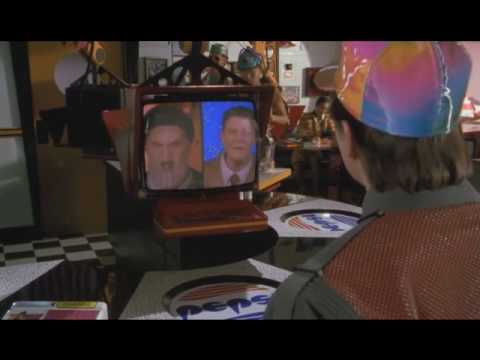 It may be difficult for Generation X and Millennials to accept, but the 1980s are long gone. The music of that decade plays on oldies stations, '80s films and TV shows are considered quaint, and today's youths chuckle at the clothing we wore back then. However, a growing nostalgia has emerged for the era of the Brat Pack, parachute pants and Reaganomics, with shoulder pads, fanny packs, denim jackets, mirrored sunglasses, Teddy Ruxpin dolls, classic Atari video games, and even the iconic DeLorean DMC-12 all making a comeback.

Back to the Future made a few other accurate predictions as well, including Americans' growing obsession with plastic surgery, the widespread use of robotics and drones, the existence of automated restaurants, and the rise of a powerful, corrupt, Donald Trump-like political figure in the form of Biff Tannen (though the latter occurred in an alternate 1985, not 2015). Flying cars aside, it's impressive to realize just how much Bob Gale and Robert Zemeckis got right when they tried to foresee what the world would be like 30 years down the line.

Speaking of flying cars, Eaglemoss Hero Collector invites collectors, die-cast enthusiasts and hobbyists to literally Build the Back to the Future DeLorean Time Machine! This unique subscription program furnishes fans with regularly delivered model parts, magazine instructions and behind-the-scenes insights with which to easily assemble a perfect 1/8-scale die-cast replica of the DeLorean DMC-12 as featured in the original Back to the Future – or customized to reflect the modifications made for the sequels.

The car builds up issue after issue and is over 20” long, with metal body panels, gullwing doors and a wealth of working lights.  No detail has been overlooked. All of Doc Brown’s modifications and personal touches have been reproduced inside and out – from the light up flux capacitor and folding seats to the rear end reactor and mess of cables on the floor.

Not only has the model been made under the direct supervision of Joe Walser, the world expert on all matters relating to the DeLorean time machine, but it’s also packed with incredible details – including the all-important flux capacitor and its time machine circuitry, plus the famously complex array of cables and lights that make this car so unique.  Quite simply, this is the finest Back to the Future DeLorean replica in existence!

A worldwide cultural phenomenon and the highest-grossing film of 1985, Back to the Future launched one of the most successful franchises in Universal's history, including two theatrical sequels, an animated television series, a theme park ride, toys, comic books, video games and apparel.

The film has been inducted into the National Film Registry, having been deemed "culturally, historically or aesthetically significant" and deserving of preservation by the Library of Congress. As one of the elite films selected as enduring importance to popular American culture, Back to the Future's preservation ensures that this timeless classic will be enjoyed by future audiences throughout the rest of time!

This 1:8 scale model is incredibly detailed and has been made under the supervision of Joe Walser, the world expert on the DeLorean time machine. It’s packed with tiny details including cables, lights in the ceiling, the flux capacitor, time circuits and much more.